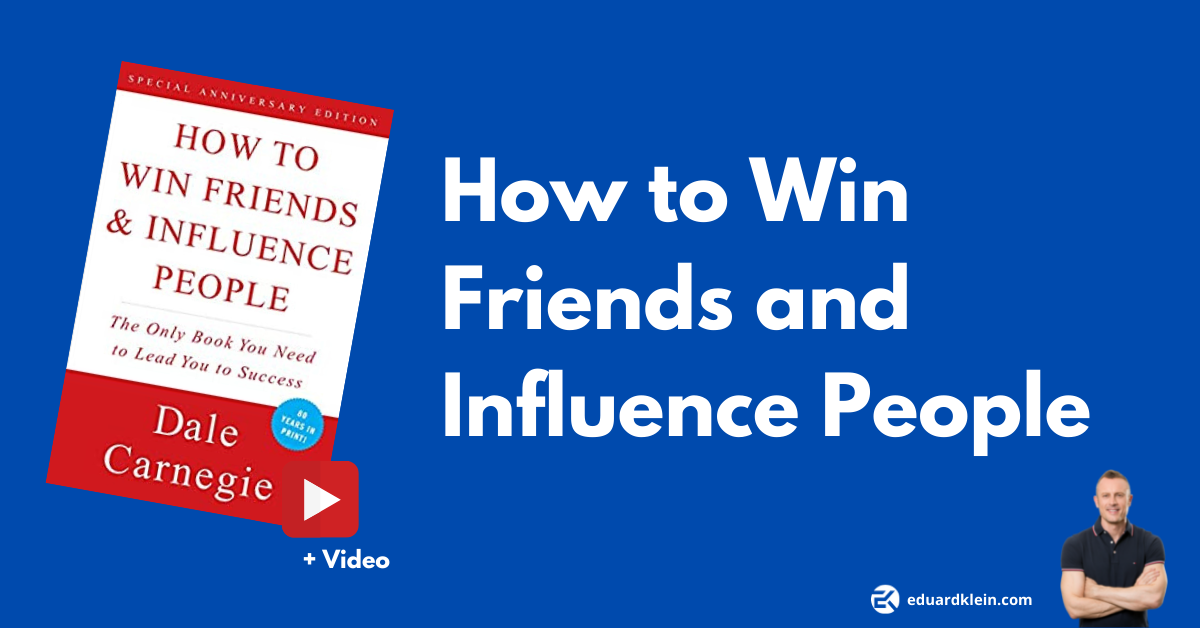 Today I present to you this valuable video by the Swedish Investor on how to win friends and influence people. Dale Carnegie was a renowned American lecturer & writer, and the developer of courses in, salesmanship, public speaking, self-improvement, corporate training, and interpersonal skills.

How to Win Friends and Influence People by Dale Carnegie

Here are the five key takeaways to learn from this book:

1.Arouse in the Other an Eager Want

The only way to influence people is to talk about what they want and show them how to get it.

Start to see things from other people’s perspectives, and you’ll have come a long way towards being more influential. Apply this principle in your life and see a difference.

2. Give the Other Person an Exceptional Reputation to Live up To

Tommy T, a bully in school, was punished by teachers, and it didn’t seem to work. Mrs. Hopkins used a different approach than what other teachers had done previously, and it worked. She used compliments instead of punishment.

If you want to improve person-specific characteristics, act as if they already possess it. A saying goes, “if you give a dog a bad name, you may as well hang him.” But try to give him a good name and see what happens.

Back to previous examples in point one

If you want your spouse to save and invest more, instead of criticizing and complaining about his or her irresponsible behavior around money, try to encourage and find situations in which the person already possesses the qualities you’re looking for ad emphasize these.

Also, try to give more responsibilities in issues of personal finance and show the person that you entrust them with this. Most likely, they will try their best not to let you down.

3. The Only Way to Get the Best of an Argument Is to Avoid It

An argument often ends with one person winning and the other person not accepting being a loser, mostly due to ego or pride and won’t admit it anyway.

Instead, what you’ll want to do is to agree on the other person’s argument that you resemble. Then after you’ve left the person, you move on to talk about your point of view and the pros that are associated with that.

It’s not enough to merely state the truth- the truth must also be vivid and exciting and dramatic. Most TV commercials are dramatized to see the difference in results before and after using the products.

Back to our examples in point 1

If you want your kids to eat healthier, don’t just tell them they’ll be stronger and can defend themselves from bullies but try watching Popeye cartoon together to see how.

5. Use These Three Ways to Make People Like You

The first trick is to show a genuine interest – People aren’t interested in you or me, they’re interested in themselves. For example, a person’s toothache means more to him/her than a war killing thousands in foreign countries. So, the solution is sincere:

This can make you win more friends in two months than you do in a lifetime of trying to show people how important you are.

Another trick is to Smile. Why a dog is man’s best friend is because they are sincerely happy to see us though not through words, but actions. Smiling says indirectly that, “I like you,” “I’m happy to see you,” or “you make me happy.”

The last trick is to remember the names. A person’s name is to that person the sweetest and the most important word in any language. When you meet a person, repeat their name during your initial conversation. If it’s difficult to ask how it is spelled, especially if it’s a foreign name.

So, if you want to create a sphere of influence, it’s about time you begin implementing these amazing tricks by Dale. Here is the link to the Youtube Video:

Would love to hear your thoughts on that (leave a comment)

Hi, I am Eduard Klein

I am a Life & Business Coach, and Entrepreneur with a global mindset. Blogging from the bottom of my heart.

As a Personal Transformation Life Coach, Business Trainer, and Certified Personal Fitness Trainer with 20+ years of experience, I trained more than 20.000 top executives in multiple countries and helped thousands of individuals to reach higher levels of performance, joy, and happiness.

I am working with a team of certified Life Coaches, Psychologists, and Physicians.

Our mission is to help you design a more exciting, meaningful, and healthy future.

Upgrade your life and live a life of extraordinary outcomes in joy and peace.